Home » Talking About » My visit to Scotland. Over the sea to Arran.

We set off fairly early on Sunday morning as it was a fair drive to Ardrossan where we were to board the ferry to Arran. As it turned out , Cl and Cr considered that it was too expensive to take the car across (£60 for the car and £9.50 per person according to the lady in the booking office) so we left it in the car park, being assured by the lady that there was a bus service available of Arran.

It was a large ferry with plenty of amenities for the passengers on board. We made our way to the upstairs deck at the bow so that we could take shots of the Isle of Arran as we approached it.  The weather as we embarked from Ardrossan was rather cloudy, but as we were to find out, it brightened considerably once we arrived on Arran, in fact you could see the island bathed in sunshine as we approached it. The clouds parted over the island and the sun shone.

The crossing takes roughly an hour to make from Ardrossan to Brodick, but we all enjoyed it, it was relaxing and enjoyable. No sign of any dolphins following the boat though which disappointed the children. (and me!) Everyone disembarked from the ferry and we made our way to the nearest restaurant for some lunch. In doing so however, we missed the bus and because it was a Sunday, it was a very limited service so our exploration of the island was then severely curtailed as we had to do it all on foot. the children were disappointed as they had wanted to visit the Kings Caves which unfortunately were situated on the other side of the Island, and if we waited for the next bus to arrive to take us there, we would to too late to catch the last ferry back across to the mainland.

To see and partake of all of the Isle of Arran’s numerous attractions you really needed to be spending at least two or three days there.  It really is a beautiful place to visit and turned out to be far larger than I had imagined.  We decided to walk along the shore from Brodick, firstly following the shore closely and then travelling inwards towards one  of the Islands many golf courses.  In fact, the Isle of Arran is a golf fanatics dream and there are no less than seven golf courses to be found on the island! As my son loves playing golf, he was in seventh heaven and has made plans to visit the island in the future so that he can try out some of the courses himself. 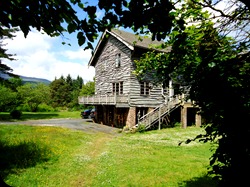 During our walk inland, we passed a very interesting large wooden house which, according to the notice displayed outside the gate, had its own website.  As you can see by the website, you can actually stay in this house, which commands some lovely sea views over the bay.  We continued on our walk where the next sight was a band of Scottish pipers who were practicing playing the bagpipes.  I stopped to take a photo of them then we continued on along the road where we found a nice place to stop and have a welcome cup of coffee and a rest.

Continuing on after our ‘coffee break’ we slowly made our way back to the coastal path as we didn’t want to end up missing the last ferry back.  We  would then have to stay overnight on the island. (actually I secretly felt it was rather tempting to miss it!)
During our return along the shore, the children bought two new fishing nets so that they could go exploring amongst the rocks along the way. We could already make out the ferry making its way across to the island. By now it was quite warm and I was really reluctant to be leaving this lovely island.  I would have liked to visit the Castle which is in full view to the north as you walk along the shore of Brodick.

We all began to regret having to leave the car behind in Ardrossan! We hadn’t been able to see most of the island and I wished I was there for a weeks holiday!  If you look at my shot of the bay at Brodick, you will no doubt notice the huge mountain in the distance. This is Goat Fell and is Arran’s highest mountain.  You can climb it if you are so inclined and apparently it commands some spectacular views from the summit.  Brodick Castle is situated just beneath Goat fell mountain to the north of Brodick and well worth a visit if you are ever lucky enough to visit Arran and have more time to spare than we did.  As it was, the ferry was looming ever closer to the shore so we began to quicken our pace along the front and back to the landing area. 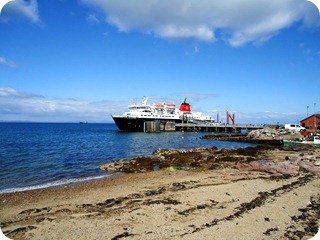 Coaches, cars and vehicles began to drive onto the ferry as we passengers made our way up the gangplank and into the various seating lounges on board.  Again we decided to sit out on the deck, this time at the stern of the ferry so that we could see the Isle of Arran for the last time as it grew smaller and smaller on the return across the bay.  There were lots of seagulls following the ferry, and some passengers began to amuse themselves by allowing the seagulls to take titbits from their hands. The grandchildren also joined in by holding some Quavers in their hands for the seagulls to swoop down and grab.

We then drove back to the Stonefield public house  for a most welcome carvery meal to round off a very enjoyable day. More pictures of our day on the Island of Arran are here on my SkyDrive.