Home » One of those Days » Yesterday’s Trek in the Snow.

What a morning we had yesterday! I should have known to stay put when it took me an age to get my boots on. Fastening laces and squeezing thick sock clad feet into boots is not my idea of a blissful start to the day. The boss had beaten me to it in her eagerness to stock up with food and was patiently waited downstairs ready to exit the door.  I was therefore in a bad mood to begin with.  We planned to walk through the cemetery (all flat ground with no hills to struggle either up or down) and thence across to a local shop. However, on reaching the road a bus passed us as the road had been cleared. 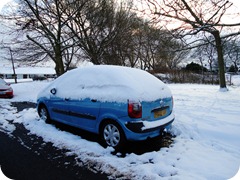 So in usual fashion we discussed the new situation, and after much dawdling and dallying we decided to still walk through the Cemetery but then catch a bus down to town and shop at Tesco’s. Reasoning here was that we had just missed a bus and by walking through the Cemetery to the other road we would then have the choice of catching at least three different buses.

Town was a mess to walk through to be honest, and was harder going than walking through the snow!  The pavements were covered with a grey horrid looking mush and slush churned up by countless pedestrians as they walked along and I was amazed at how busy it was!  It looked as if every resident in this area had decided to brave the weather and shop. Tesco’s was even worse.  It was an absolute madhouse in there with shoppers piling their trolleys sky high with goods as if they were intent on doing all of their Christmas shopping now to tide them over for the next three weeks in case they were snowed in!

Every checkout  had queue’s of inpatient shoppers waiting to go through them with tempers fraying and looks of wrath on their faces. Woe betide you if you tried to work your way past them to go to another aisle! Traffic jams of trolleys filled nearly every aisle you ventured down. I think that at this time of year, the supermarkets should use some kind of ‘aisle rules’ for shoppers, such as ‘Only go left down this aisle, do not loiter gossiping to another shopper in the middle of the aisle and please do not obstruct other shoppers down any of the aisles by stopping in the middle for any reason unless taken ill, etc etc.’

If their car driving is as bad as their trolley driving then I am glad I don’t drive! Talking of which, we had an incident occur in the Supermarket car park involving our Taxi.  We had to order one, because as usual (and probably taking her cue from the sight of all those trolleys piled up to the roof) the Boss went mad and bought tons of stuff, which if she manages to get to respite today will end up being wasted on just  me.  On arrival outside at the Taxi pick up spot, a  lady was getting rather irate as she yelled at every taxi as they pulled up to the pick up point and said someone’s name apart from hers.

“I’ve been here for fifteen minutes waiting!” she kept saying to each driver, “That lady was behind me! Can you ask your desk where my taxi is?”  so of course when our taxi pulled up, she became even more indignant. Our driver rang through to the office to let them know that she was complaining, but the office insisted that she rang in to book a taxi after us.  However, just as we drove around the car park on our way out, a car suddenly pulled out in front of us and there was a bump as they both collided.

Our driver had to get out as did the other driver to exchange particulars. This meant that anyone else trying to exit behind us were now stuck and we had some irate horns pressed from behind before we were able to continue on.  He took our names and addresses as well because of course we were witnesses to the whole thing.  Hmm. First foray out for days and we have all of this occur!  Put’s you off  I can tell you!  It was the other drivers fault though as he simply didn’t look before pulling away.

I now have enough food in for at least four or five days even if the Boss doesn’t get to respite. At least, I think we have.  It’s a good job she wasn’t around during the war when everything was rationed, that’s all I can say!

19 thoughts on “Yesterday’s Trek in the Snow.”