Home » One of our walks » A Walk around Coley. 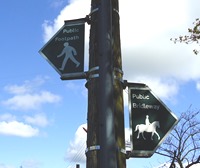 Yesterdays walk was a strange one in that right up until the very last minute, we didn’t know where we were going to begin or end up. We had planned to go with the Heartbeat gang as usual, but one of the walk leaders contacted me to state that he didn’t think it would be suitable for Kerri as there were quite a few steep and very muddy sections to climb, a combination that has tended to spell disaster in the past with Kerri ending up covered in mud after a slip and fall.

At the last minute, I suggested that we walked from Coley church via Coley Hall Lane. It’s a relatively flat walk down a bridle path that I knew wouldn’t be muddy. We would eventually emerge at Leeds/Whitehall road where we would either walk through the golf course or continue down the road to Lightcliffe and our lunch venue, the Sun Inn.

We caught the 10.15am bus to Coley which dropped us off conveniently right outside the church. I had hoped that Kerri would be rewarded with some close encounters of horse and riders out for a walk, seeing as Coley Hall Lane is a bridle path,  and even before we had reached the Coley Hall Lane entrance we encountered three ladies out for a ride with their mounts. Pleasantries were exchanged and as always she was eager to learn the names of the horses. Following that encounter we began our walk. It was a very pleasant day weather wise, not too hot for walking, and although Kerri does find the going tough over rough surfaces, we still managed to make good progress.

It was such a clear day that you could see Emley Moor transmitter over in the far distance. Strangely enough there were quite a few people also using this route, three young ladies went jogging past us, two or three people were taking their dogs for a walk, and one remarked that it was unusual for this lane to be so busy! There aren’t all that many homes on this route either, but what there are are really very attractive, with quite a few  barn conversions and the lovely cottages. It was so peaceful and quiet as well without the usual vehicle traffic. 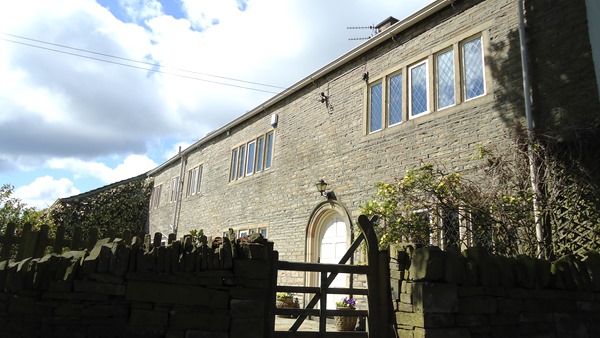 We could have continued onto Norwood Green which was forming part of the mornings walk for the rest of the Heartbeat crew, but we had already decided that we would head towards Lightcliffe instead. We passed a horse training yard where a lady was busy training a horse and Kerri was rewarded with the sight of many horses grazing in the field next to it. As we neared the end of this road, we again met the three ladies out riding who had obviously done a circuit tour and were on their return journey. They were followed by some more younger riders who stopped to have a chat. Kerri was in her element! 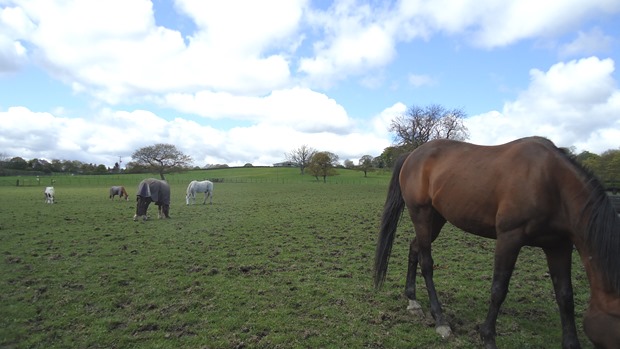 Crossing over Leeds road by the White Horse Inn, no easy task by the way, as its a very busy road, we continued down Knowle Top road and then onward to the Sun Inn at Lightcliffe for our lunch. By the time we arrived it was only 11.30am so we enjoyed a relaxing drink as we waited for our meal.

I plan to do this walk again at some time in the near future, probably making  a longer and more circular route by starting at the White Horse Inn and eventually ending back there for lunch.  Enjoy the photos taken as we journeyed along, and I hope you enjoyed our walk as much as we did.

This blog composed and edited in Live Writer.

6 thoughts on “A Walk around Coley.”