Home » One of our Jaunts » Another day out in Wales.

Yesterday, we had another excursion to Wales, this time offering a choice of venue which were to visit either Betws-Y-Coed or Blanaeu Ffestiniog. I hadn’t a clue as to what either venue offered and hadn’t really made up my mind which one to choose until we arrived there. In the end we decided to remain on the train and not alight at Betws-Y-Coed, although in hindsight we may not have made the right choice. It’s now blatantly obvious to me that I certainly miss the detailed information that used to be supplied to every passenger on the GreenExpress Railtours and which helped you to not only be able to find your way around a venue that you were unfamiliar with, but in cases such as this where you were offered different venues to visit, helped you to decide which one seemed the more interesting.

Unfortunately, CompassRailtours  don’t provide a detailed information sheet and brochures about the venues that you are travelling to , so you are completely in the dark about the interesting places that each new venue offers unless you have visited before. All you are given is a simple synopsis of each venue.  Someone else on the train stated that Betws-Y-Coed was just a small village and that Blanaeu Ffestiniog was bound to offer more. After all, it had the Ffestiniog narrow gauge railway and a slate mine so surely it would be the venue of choice. We had just three hours to explore Blanaeu.

When we arrived, it was about 1.00pm or lunch time to my sidekick Kerri,  and all my readers will be well aware of what that means. First priority then was to find somewhere decent to have some lunch. Hmm.  Exiting the railway station, it looked as if the whole place was being completely overhauled. Areas were cordoned off with bright orange fencing surrounding road works and building works making the whole area look unkempt and messy. Right outside the station was supposedly a Hotel which also contained a restaurant called the Queens Hotel. We entered and then quickly beat a hasty retreat. According to the signage outside it was up for sale despite its obvious advantage of being right outside the famous Ffestiniog railway and I would have thought a veritable money spinner owing to its position and a prime choice for tourists to either stay at or eat in.

As the current owners were obviously vacating the premises, it was run down and didn’t look terribly well looked after, in fact during the short time we were there, there was no member of staff around to ask about meals. Using my mobile and the Local Scout tile, I did a search for somewhere else to eat.  One of the choices was the King’s Head Hotel, so we set off using my phone as a map guide in a similar way to using a Tomtom in a car. It was quite a trek, and at one point we actually crossed the narrow gauge railway and saw the train pass us by.  However we were to be bitterly disappointed when we finally arrived at the King’s Head Hotel as it appeared to be closed!  What sort of place was this? Was nothing open for visitors?

We made our way back to the railway station and entered the fish and chip shop that we had spied earlier. I had been reluctant to choose to have our lunch there but in hindsight we would have been better to do so, as by now it was past 2.00pm and the cafe area where you could sit down to eat your fish and chips was now closed! We had to take them outside and eat them as best we could sitting on a nearby bench in a blustery wind.  Not only that, but at precisely 2.00pm, the ice cream parlour across the road also closed.  Didn’t these people want to encourage visitors and tourists to their town? What on earth was wrong with these people?  The whole place resembled a roadwork’s and there was little or no services provided for visitors! Where were all the gift shops etc.?  Where was all the hospitality and encouragement to return for another visit in the future? 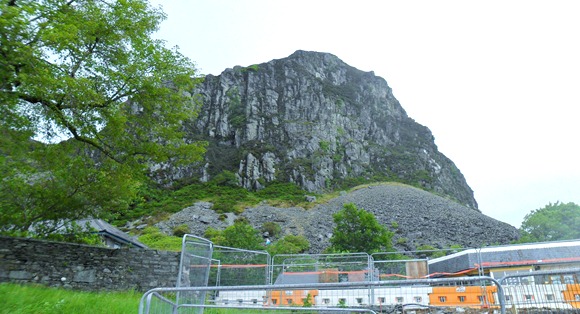 I have since learned via the web that our visit was actually ill timed as a ‘regeneration’ of the town was begun as recently as May this year, so we can probably put the whole experience down to bad timing, and hope that once the regeneration has been completed then things vastly improve.  I would have loved to have paid the Llechwedd Slate Caverns a visit whilst we were there, but wasn’t sure how far they were to walk to and therefore whether or not we had enough time.  An ideal opportunity would have been to provide a bus service that picked up visitors from the railway station and took them to the Slate mine.  If we ever return to Blanaeu Ffestiniog in the future then I will make sure that we pay the slate caverns a visit.

The only upside to our visit was that luckily the weather was kind to us as we ventured around the town, and the rain, although always threatening to put in an appearance judging by the dark ominous clouds, thankfully stayed away.  Enjoy my photos album of our day and as always just click on it to see all the photos and also as slideshow if you prefer.